Texas native AJ Anderson might be new to the Oklahoma youth lacrosse scene, but he is anything but new to lacrosse. Growing up in Austin, TX meant lots of time on the lacrosse field for AJ, two-time All State recipient for Westwood High school. With the majority of his free time spent on the lacrosse field as a goalie, AJ was hand picked to play for Dallas Select, an elite competitive club. As a rising high school junior, he met his present colleague, coach Anthony Crimmins, who recruited him as a player and eventually a coach.

AJ went onto to compete at the collegiate level for Texas State University. Quick to catch the eye of his college coaches-despite being surrounded by several previous NCAA players-AJ proved his worth as a goalie following his freshman year. Three year starter, three year captain and three time all-conference player, pressure-filled games were the norm. A win against the University of Texas in the conference championship game was a career highlight that catapulted his team to nationals vs. Colorado Boulder, where AJ had 18 saves.

We are not just a collection of teams but a program, one that’s based on player development.

Coach Crimmins, program director at Oklahoma United and founder of StickStar Lacrosse, had his eye on AJ as a sophomore in high school and thought his player potential was significant. “AJ is a grinder. A player who poured everything into competition, always ready to compete, never making excuses, never being injured, never satisfied. AJ is the model of consistency, and the consummate teammate. As a goalie you must manage and communicate with your defense. This ability to develop key relationships matched with the consistent effort he brings when on the field are also key strengths in coaching. While still playing at Texas State his desire to give back to his select program was substantial so he started coaching at our Seminars. It is his consistent investment in both his and his players development that demonstrated his tremendous potential. He was a natural choice to join our coaching staff with StickStar and eventually appoint him for the OK United head coaching position. 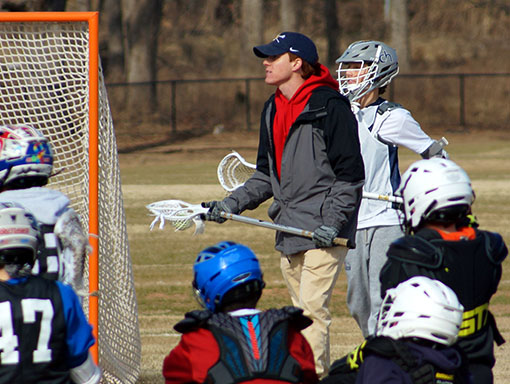 With extensive experience under his belt, AJ is now excited to call Tulsa home and grow the OK United lacrosse program. Seeing his goalie experience as a unique advantage, he is embracing the challenge of growing a new club from the bottom up and is open to having any lacrosse players come train with him. Playing for another club isn’t an issue for AJ, whose number one priority is training. “We’re okay not being the first choice for some people. They already have a team they like and that’s okay. But if your player wants more training, we are here. And we are here to stay.”

AJ will implement StickStar’s Component Based Instructional Methodology, a systematic approach to teaching lacrosse, starting with fundamentals. In terms of style of play, coach Anderson likes to play fast, without rushing. He believes in going 100%, without feeling like the game is moving too fast. AJ is all about lengthy offensive possessions and dictating both sides of the ball. Defensively, AJ believes in telling the offense where they can and can’t go on the field. “I want to teach my players to apply pressure to the opposing team on both sides of the field. It’s not always necessary to score on the very first look. I like to force our opponents to slide and recover and slide again. I’m all about holding onto the ball because your opponent can’t score if they don’t have it. In my playbook, time of possession is critical.”

Having the Titan Sports & Performance Center as OK United’s home base means year-round training at a state of the art facility. Titan will enable OK United to train consistently and establish a program that couldn’t otherwise exist. Titan will also allow OK United to establish a real lacrosse box league that is sanctioned with box refs. Players that want to perform at an elite level will have access to private instruction. Moreover, having Titan as a partner also means they’ll attract D1 coaches that run combines and recruit players. AJ is excited for all the opportunities in this program’s future including tournaments that attract regional, if not national, lacrosse teams.

What You Need to Know About OK United #46ers

Oklahoma United will focus on a system of basics to give their teams maximum opportunities in every phase of the game. “When you have a specific method of development for most every individual skill, positional movement and team based concept, it quickly becomes not very basic. We are all about player development and there’s no better coach to develop interested players than one that has lived it,” says director Anthony Crimmins.

I want to teach my players to apply pressure to the opposing team on both sides of the field.

Players and parents alike can expect a lot of skill drills including hand exchange, carrying with pressure, carrying with eyes up, line passing, roll aways, fakes and finishing. Defensively, the same systematic approach will be employed. From the way you slide on defense to where your second slide comes from, fundamentals will be the foundation of every training session. Anderson knows this strategy is successful because it’s how he learned to execute the game. “Scrimmages are great and have their place, but ensuring you have a solid understanding of the game is paramount,” says Anderson.

Enjoy this blog post? Make sure you get the latest news and information about training and events at Titan Sports & Performance Center!
What does Coach Anderson want potential players and parents to know about OK United?
Send this to a friend